I have been asked why I created a synthetic deer scent powder, Lucky 7 Mock Scrape Magic. The easy answer? Because I can.

This powdered deer scent came about from some research I was doing. Synthetic scents you find on the market can contain just about anything. In the case of synthetic tarsal gland, that is particularly true. I have seen wintergreen in synthetic scent, used to simulate tarsal gland secretion (cedar oil and vanilla as well). This, of course, isn’t a true representation. From the research I did, the only report I found on the composition of tarsal secretions turned out to be later proven incorrect. No one was making a true synthetic tarsal gland that closely resembled the real deal. I decided to figure it out.

After much work and research, I had perfected synthetic tarsal gland. So I started to work up a formula to use it. As I was working, I thought about the ingredients I was going to use. It turned out, all of them were available in solid form and in the proportions I needed. Liquid was actually unnecessary in this formulation. At first, I found it to be simply a curiosity,  but later I thought about some neat things I could do if I didn’t NEED to use liquid. The wheels in my head began spinning.

It took several days of thinking, but I determined some cool things I could do if I had no liquid. The major one was the ability to create a scent that had components that didn’t age, some that aged slowly, and yet other parts that aged somewhat rapidly. BUT ONLY AFTER APPLICATION! It would remain stable in the packaging (no liquid to intermix them), but once applied to the ground, the process would begin. In short, I could have a mock scrape that appeared to be used much longer than it had been around. It would appear to contain both aged deer urine and secretions and fresh components, all at the same time, just as a natural scrape would. Reapplication needs would be greatly reduced with months between each one. I postulated it would be extremely effective. I took my basic dry formula and added the necessary chemistry magic to make this happen. Tooting my own horn a bit, but it is genius the way I accomplished it from a chemistry standpoint.

It turned out great. It did exactly as I hoped. It was stable in the container, but once it hit the soil (with its natural bacteria and enzymes), the aging process started at each level. Within hours in some conditions, the fresh mock scrape began looking like a scrape that had been started weeks before, yet was still being actively refreshed. I bottled a bunch up and sent it to a few testers. I took some and tested it myself.

The deer LOVE it. It became quite obvious right away that the deer recognized it as being the real thing to them. They weren’t curious about a foreign scent or cautious in there approach. They jumped right in, adding their own scent to brand new mock scrapes as if they had been there and active for a long time. No hesitation, daylight visits and they visited often. They just kept coming. Sometimes I’d have multiple deer in the scrape at the same time! I have little doubt I have the tarsal gland formula correct and the pheromone I determined and added is doing its magic. The 2.2 oz bottle will make DOZENS of mock scrapes. It is certainly a great value as well as extremely effective.

This is what you get from Nelson Creek Outdoors and Lucky 7 Scents. We don’t just take a bulk scent and put our label on it like others do. We create awesome, innovative, original formulations. We are the only ones that have a synthetic deer scent powder. Others may try to “infused” talcum or other powders with deer urine or add urine to dirt and put it in a bottle. Gel beads soaked in synthetic scent are common, and other companies replace water with waxy substances to make pellets. But no one has ever made a powdered product that contains 100% scent. And certainly NONE have the perfected tarsal and pheromone we have in ours. I am sure others will try to copy us as they have before and try to claim our innovation as ours.

We aren’t about parting the hunter from his money. We are about connecting hunters with trophy bucks. 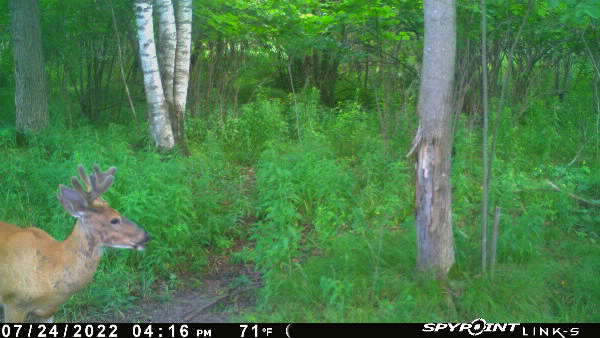