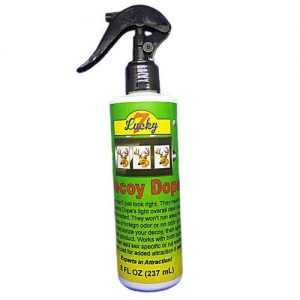 Lucky 7 Decoy Dope – Deodorizing your decoy is a great idea, but it may not be enough! Deer spook not only when your decoy stinks, they also do not like it to smell like nothing. This spray scent is the light overall odor of a deer. It smells natural and how a buck would expect your decoy to smell if it were real. Can be used with sex based scents on the tail end of your decoy for an enhanced effect. Also makes a great cover scent for your stand, gear or trail cameras.