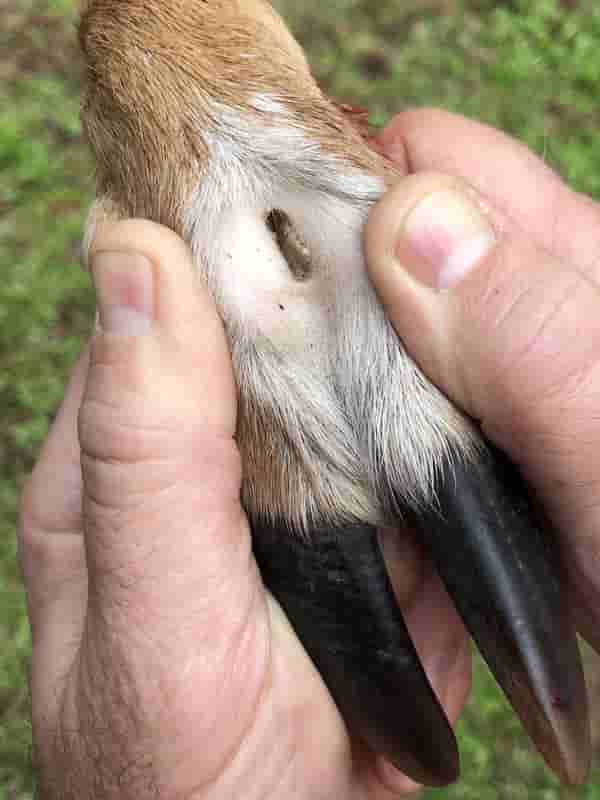 The interdigital gland of deer is probably the least understood of all the glands (metatarsal in whitetails is a close second). There are some articles online that contain bad information and I hope maybe to clear that up.

The interdigital gland is located between the “toes” of the whitetail deer, one on each foot. It has a very characteristic odor. It is thick and yogurt-like and has an odor much like strong cheese with a touch of garlic or skunk. It is by far the worst smelling of the glands and in making the synthetic version, it can really overpower you fast. It is a gland deer use to communicate on a near constant basis and can be very useful to the deer hunter.

The main use of this secretion is for deer to be able to locate and follow each other. This would account for the strong odor it produces. As the deer walks, it deposits a small amount of this scent with each step. Have you ever seen a deer follow the EXACT tracks of a deer that passed hours earlier? They are generally following that particular secretion odor. Fawns can use it to find their mothers if separated (without bleating and giving away their presence to predators) and does can locate their fawns. Bucks can follow the trail of a doe (they can tell an estrus doe by other scents that happen to mix into the interdigital secretions). It also keeps them in close contact when traveling in the dark, or in relocating each other after being scattered by predators. It can also help deer in identifying areas where feeding has occurred. It also turns up in deer scrapes. You can see just how prevalent this scent is in the deer’s daily life. As a side note, this is also one of the odors deer trailing dogs use to help locate a wounded whitetail they are tracking.

There have been some reports of interdigital gland scent being left behind when a deer stomps at an intruder. This certainly does happen, but I do believe it is a secondary effect. A deer would have no way of knowing this was the reason for the deposit of this material, and hence would get no warning from it. As deer have been seen sniffing areas where another deer stomps, yet are never spooked by the odor, I add this to the list of “fake news” due to being misreported on the Internet. It is certainly an attractive odor to deer, not a cause for alarm.

How is this useful to you? Knowing deer follow the trail of scent left by this deer gland, you can often get deer to follow a trail you leave and have them come toward you. Simply use a quality scent, such as Lucky 7 Synthescent Whitetail Deer TRAX on a drag rag pulled behind you or on your boots and leave a trail that will smell like a deer recently passed through. Deer may follow that trail right to your stand. It also works as a cover scent, hiding your human odor. Or you can use it to lead a trail to your mock scrape or bait station. It has many great uses.