Tarsal glands deer scent can be a very effective tool for harvesting whitetails. However, many hunters that have tried it report less than stellar results. Why is that? Simply put, companies that have tarsal gland scents have been putting out inferior products for years. If you want to have more success, you have to understand these industry-induced failures.

Hunters figured out long ago that other deer were attracted to the tarsal glands of previously harvested deer. These deer glands, located on the back hocks of a deer, contain pheromones and other chemical signals that are of interest to other deer. It is part of their normal semiochemical communication routines. The gland itself has a sebaceous gland that secretes lipids, fatty substances made by the gland. The specially shaped tuft of hair on this gland allow a greater surface area for this substance to be deposited and delivered to the air. There are a LOT of theories on how the attractive odor is created. ALMOST ALL are wrong. However, the basics are this: the glands produce the lipids, they are mixed with urine during a rub-urinate act and along with the help of some endemic bacteria, they are converted into the individual, attractive odor for each deer.

If they harvested a buck whose tarsal glands were obviously active for the breeding season, hunters would cut them off and use them to help assist their efforts of harvesting another buck. However, that created a few problems. First, to get the tarsal glands, you had to first harvest a buck without their use. Since they don’t last terribly long in warm temperatures, they would often spoil prematurely. To save them, hunter often froze them. This can damage the scent and is not terribly convenient. They had to be thawed to be effective in use and cyclic thawing and freezing is not good for the natural scent either. Simply put, they were very hard to use and hard to provide commercially.

A few methods were developed for using real tarsals in commercial scents. Freeze dried glands were attempted, but the supply of them was too small for larger companies to provide them. Freeze drying also removed the attractive but volatile components. Another company actually boiled tarsal glands in deer urine to supposedly “infuse” the urine with the gland material. This basically cooks the tarsal and damages both the glandular fluid and the urine. It added to the problem of real deer urine spoiling rapidly on the shelf. Commercial viability was sorely lacking. To meet demand and artificially extend the supply, some companies finally went to a method used in the perfume industry for creating more stable scents and creating desired volumes: tincturing in alcohol.

Tincturing is a simple process. To tincture the tarsal glands, you simply soak them in Vodka or perfumer’s alcohol. After some time, the scent is distributed into the alcohol and can be then used for a scent or added to deer urine. This is what most commercial companies now do. Does it work? Sure, to some extent. It does have some downfalls. The alcohol itself can produce a scent (or a bad taste due to the chemicals used to denature perfumer’s alcohol). It dilutes the scent and will also damage it, reducing effectiveness. The alcohol portion can also damage any urine it is introduced to. That being said, it is the only real commercially viable way to make a real tarsal scent, despite it making such scents fairly ineffective compared to their natural state.

Synthetic scents are another option to try to improve over the tinctured versions. Previously to my company’s involvement, this was a terrible choice for tarsal-based scents. There are several reasons for this. First, scientists have been interested in pheromones, for both whitetailed deer and other animals, for a long time. Figuring out the chemicals of interest, however, can be very difficult. Deer glands can be a chemical soup, not only of the animal’s secretions, but also of bacteria and environmental contaminants. It can be very difficult, even under perfect conditions and with great equipment, to identify exactly which chemical or combination is the attractive component. When scientist checked the tarsal glands, they made errors. First, the chose a species that does not have the overall popularity in the hunting community as whitetails for their study. Second, they simply made an error and identified the wrong chemicals. A few synthetic scent formulators ended up using this for their synthetic tarsal offerings and therefore created an ineffective, unattractive scent. Not being widely known as being an error, these scents may still persist in the marketplace.

As I have mentioned in other articles, many in the synthetic scent world aren’t making true attractants. Instead they are making “pee perfumes” made to trick hunters and rookem into believing the juice scent smells like urine or glandular secretions to deer when they actually don’t. They often use petroleum products and perfumery chemicals to accomplish this. Synthetic musk additives, being made to smell good in perfumes, often do not resemble animal musk at all yet are still used in these formulations. This has created many ineffective scents that are not attractive to animals at all. They may induce some curiosity, but a curious deer is an alert, suspicious deer. This isn’t what you want from your synthetic tarsal glands scent if your interest is an advantage in harvesting a trophy buck.

This is where Nelson Creek Outdoors stepped in with Lucky 7 Synthetic Scents. We did the research necessary to create a much better synthetic tarsal gland scent. We formulated our own and came up with something truly effective. It is one of the effective parts of our Lucky 7 Buck In Rut MAX and our Lucky 7 MAXX’D OUT Mock Scrape Sprays. It is proven to be very effective. However, we never want to walk away from our dedication to creating new scents and improving existing ones. To this end, we continued our research this year with two test formulations, similar to each other, of an improved tarsal scent. We called them Bullfighter and Oil of Olay, code names we gave them when distributing to hunters for filed testing. Both scents got phenomenal results from test staff in the field. We know we have taken another true step forward in synthetic tarsal formulation. We are currently working on making a new synthetic scent based on this technology and, once perfect, we will upgrade our other formulations. The chemistry associated with pheromones and semiochemical communications is complex, but we are dedicated to making ever better scents for hunters. We will always be State of the Art when it comes to effective synthetic deer scents.

If you want scents that truly attract deer due to being chemically relevant to  whitetails, Lucky 7 Scents are the only ones you should choose, including tarsal glands deer scents. 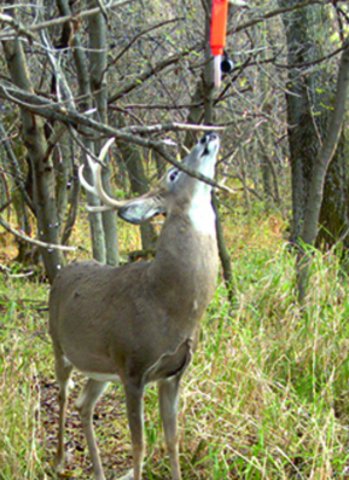