Synthetic Buck Urine can be used to attract other bucks almost all season long. Why? for several reasons we will explore below.

Other than the rut or at feeding areas, bucks and does do not spend much time interacting directly with each other. While they will communicate through mock scrapes, bucks spend most of the early part of the year in bachelor groups, not with the does. They bed in different areas than does and travel on different trails (which is why the intersection of buck and doe travel trails is such a great place to make mock scrapes). These bachelor groups mainly consist of mature bucks, not yearlings, with each group containing one particularly dominant buck. The yearlings may form bachelor groups with other yearling bucks.

These bachelor groups of older bucks are where the rutting hierarchy starts be be sorted out, long before the rut begins. This is why bucks are interested in the urine and glandular secretions of other bucks. Buck pee helps them determine their social standing. Using a product like Lucky 7 Buck In Rut MAX or Lucky 7 MAXX’D OUT! Mock Scrape Spray can help you get these bucks on camera when you use the synthetic buck scent in a mock scrape. What does buck urine do? It makes them believe there are additional animals in the area that they will try to identify. Often, you will see multiple bucks from the same group checking out the licking branch and mock scrape you made and also urinating in it themselves. They will actually copy each other. These are extremely fun spots to watch with a trail camera.

In early September, buck behavior changes. It begins with a rise in testosterone levels and the bucks shed their velvet from their antlers. They individual deer start becoming restless and some light sparring will occur as they continue to sort their hierarchy. Within the next few weeks, the bachelor groups will disband as the individuals in it seek out their own territories and again become more solitary. This is often a time when you will see less activity on your cameras and over mock scrapes.

As the rut approaches, buck urine and buck tarsal scents continue to attract bucks. Mature animals think they have identified intruders in their area and will want to find them. If it is a young subordinate buck, they will want to simply chase him off. If they believe it is a dominant animal, they will be looking for a fight.

As the rut approached, aggression will peak in dominant animals. As hunters, we can take advantage of this. One of our rut scents uses both peak estrus urine along with adding some aggression to the mix. Lucky 7 “The Juice” simulates a hot doe that already has been breeding other bucks. It does this by adding scent cues that she has another suitor that may have already fathered one of her fawns. These sexual cues, along with the perceived scent of the buck that has already bred her, can drive big bucks absolutely MAD. They will search for both the willing doe and his challenger relentlessly as he hopes to father any remaining fawns. Synthetic buck urine and other fluids, pH levels and other items create the perfect illusion in this lure.

Once the rut is done, will buck urine still attract others? Yes. Some does will not become pregnant during the main rut. This often causes them to go into estrus again later in the season. The challenge presented by buck urine will continue to hold the interest of other deer. Observation of this event will be key in using it to your advantage to harvest a late season trophy.

Semiochemical communication among deer can be very complex. However, simplifying it down to the basics will help you to be successful using buck scents all season long. 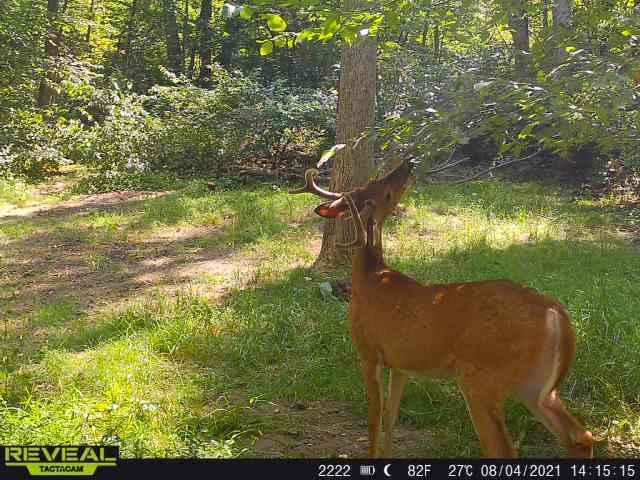