So today was the opening of the 2019 deer archery season. It started a bit rough, but not overly unlucky. I got to bed around midnight and got out of bed about 2am to shower (with unscented body wash) and load the rest of my gear in the truck. Left home and picked up Curt in Princeton, then headed up to the Nelson Creek Outdoors proving grounds. Got their about 20 minutes later than planned. First fly in the ointment.

We put on our clothes from the garbage bags (had been washed in no scent detergent earlier) and then sprayed down with the NEW Scent Eradicator Spray by Whitetail Alchemy. Walked to our entrance into the marsh and applied Lucky 7 Synthescent Whitetail Deer TRAX interdigital scent on our boots. It is a nice, thick, sticky liquid that leaves a great scent trail and covers any unmasked human odor. We then got to Curt’s stand.

STRAP FAILURE! The ladder stand was no longer fastened to the tree. I held the ladder while Curt climbed to the top to make a quick repair. Once done, I proceeded to my stand, more than 25 minutes after opening. As I approached it, my #1 hit list buck jumped about about 20 yards in from of me and splashed across the creek. A doe went with him. OUCH.

I reapplied some TRAX and climbed into my stand. It really was a beautiful morning, even though I was convinced I was now just sight seeing. Both Curt and I heard some deer and then it got quiet.

I then heard a noise behind me approaching. It was over my left shoulder and I did not want to risk moving and get busted. Finally, a 1.5 year old doe came to within 5 yards of my stand. She then laid down, looked around one last time and laid her head down, apparently taking a siesta. I watched her breath and twitch a bit, might have been a good dream. I had decided I would take a large doe, but not one her size. She had a free pass today.

After about 20 minutes, something seemed to wake her up. She slowly stood up, peered through the brush to the south, then slowly walked in that direction. She ended up right beneath Curt. He passed on her, too. It was just as well as in another Murphy’s Law moment, Curt had fallen down in the marsh walking in. Once in the stand, he discovered he had broken his red dot sight. When it rains, it pours.

Now it was about 9am and I was thinking how happy I was just to be in the woods. Both Curt and myself did not have much free time this year and unfortunately, we were not able to prepare as we had liked. But any day in the woods is still a good one, right? Spooked hit lister or not. I had no reason to believe I would take a deer today, even though I had decided I would take a big doe or buck, or a cull buck were the chance be given to me.

I was about ready to call it quits, and probably would have in 30 minutes. Right then, movement in the brush to my right caught my eye. Was it that stupid red squirrel? Another bird coming to feed on the crab apples around me? No, it was a buck!

Now, the story would be REALLY cool if it was my hit list buck again. But alas, it wasn’t. Instead it was a small buck that was a late fawn the year before. One bit of excitement, being born extremely late the previous year, he still had velvet! I never harvested a fuzzy buck before.

He caught wind of the TRAX scent and he came in like he was on a rope. I finally decided to let one fly when he was 3 yards away from my stand. The sound was unmistakable, but he walked off almost nonchalantly. He walked about 12 yards, then stood there scanning the bushes. I was not too worried though; blood was pumping out profusely.

Suddenly, his body finally signaled him that something was wrong. He took a huge, fast spring forward but crumpled up mid bound. He was done.

It was fun to harvest the first fuzzy out of so many deer I have harvested. His rack is not impressive and was still extremely brittle. In fact, one tip was broken as you can see in the photo. Still, it will be a great memory.

Now, why this elaborate story for what many would consider a less than average harvest? Because the trophy is in the memory of harvesting an animal you wanted. I have plenty of big racks. More than my share. But nowadays, just like many others, I get so busy, I often get less time in the woods than I would like. That is the whole reason I started Nelson Creek Outdoors. I wanted to create quality deer hunting scents and products that would help people be more productive hunting, even when their time was limited. This scent did exactly that. When everything else went wrong, Lucky 7 Synthescent Whitetail Deer TRAX attracted the interest of this buck and brought him right to me. With his attention diverted, and my own sweaty body (remember, had to fix a stand, then kinda rush into mine) cloaked using Whitetail Alchemy Scent Eradicator, that buck never had a clue I was there. I make this stuff to work for you and also for me. And it does, no doubt about it. Give us a try, you won’t be disappointed.

One last note: Murphy wasn’t done for the day. We brought in the ATV for dragging duty. The grass was over  meet tall! It was hard to see. As we approached the creek, I said to Curt that I hope with all the recent rain that we don’t find a deep frost pocket. The words no sooner left my mouth and we pushed through some grass and found that dang frost pocket. Thankfully I hit the brakes just in time. The back tires were on the edge of the pocket and with some pushing, pulling and rocking, she powered out. One more foot and it would likely have been a different story. 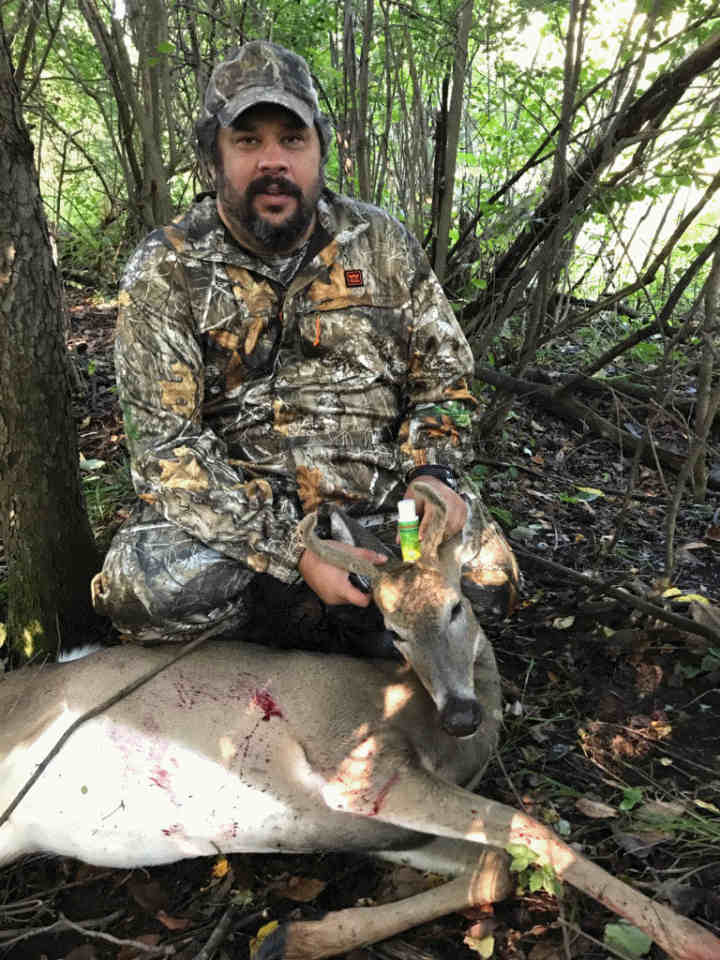