How to Correctly Use Doe In Heat

Doe in heat is a great scent to use for deer hunting. This time of year, we get LOTS of orders for it. However, using it incorrectly can actually hurt your hunt more than it helps in some circumstances.

Doe in heat urine is best used during the rut (or, sometimes the “earlier rut” that happens when some older does sometimes get a biological advantage and go into estrus 28 days sooner than the other younger does). If you can fool a big buck into believing a ready doe is frequenting the area, you can greatly increase your chances of harvesting him. Most of us have seen bucks trailing estrus does, following them for miles and waiting for the right moment to breed with them. If the doe is not ready to mate, she will run away and the buck will give persistent chase. This is great if you are hunting bucks, but if you think about it, it is not too great for the doe.

Does do not like being harassed. When they start giving off early signs of estrus, they attract bucks. Several bucks in the area will start harassing her, trying to breed. She will rebuke them, but they will be persistent, shadowing her and bothering her. Many of you have likely seen older does snorting at young bucks that are acting a little too big for their britches. With all that negative attention, other does do not want to be near her and will often leave the area. When the non-ready does come across the smell of a doe’s urine that smells like she is in estrus, they will often turn around and head somewhere else. They don’t want bucks bothering them before they are ready! This is a bad situation for someone who is looking to harvest a doe or for someone trying to keep does in the area to later bring  bucks in with them.

To avoid this issue, don’t use doe in heat too early in the season and don’t just drip it around nilly-willy at several spots. Instead, use it to target a buck you want to harvest, use it in your preexisting mock scrape set ups. This will help bring that big boy to your stand and avoid scaring off the other does.

How do I use our Lucky 7 Synthescent Doe-In-Heat PLUS? First, I wait until I see signs of bucks chasing does. This way, I know there are a few estrus does around and since they are already getting followed, they are less likely to avoid the scent I am placing. One of my favorite things to do in mid-October is to start making mock scrapes using Lucky 7 Synthescent Buck-In-Rut MAX and Lucky 7 Synthescent Preorbital/ Licking Branch GEL. When I start seeing the telltale signs of estrus does, I add Doe In Heat to those scrapes, usually in late October or early November. My preferred method is to use a scent dripper. Synthetic scents don’t mind heat or sun, so they are PERFECT for drippers. This really riles up the resident big buck and he will keep coming back to check on this doe and any rivals he thinks are around due to the buck scent.

As the real rut starts to fade, it is time to use the doe scent even heavier. Does stop avoiding estrus does at this point and are much less worried about being harassed. The bucks, however, are now cruising around to find the few does left in heat. Make him think you are that doe.

Some deer hunters do no realize there are more ruts following the main rut, usually spaced about 28 days apart. This is due to some does not getting pregnant during their first breeding, so they go back into estrus and have another chance to become pregnant again. This can happen all the way through January, especially in the southern state.

Doe in Heat is a great scent and a great tool. Use it wisely and it certainly can help you harvest the trophy of a lifetime. 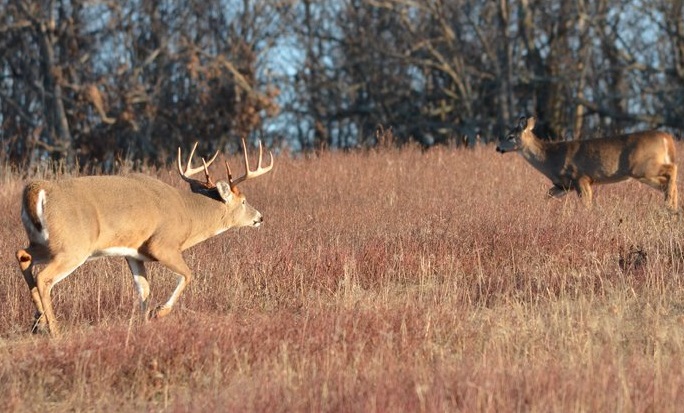