Habitat Management and Other Plans for Spring 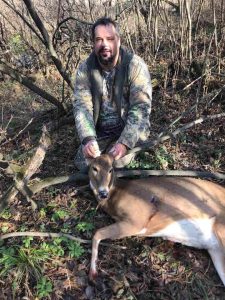 Deer hunting is over. Bass fishing won’t open until May. What is a guy supposed to do with this downtime?

It is time for making plans. First, once we get some decent temps again (very cold weather right now), I do plan to do a little ice fishing. I like to go catch bluegills through the ice and have some good meals. I don’t often keep fish, but when I do, they are almost always pan fish. They make great table fare. My favorite bass lake could use some thinning of the smaller bass, but somehow I can’t bring myself to do it. I don’t begrudge anyone who does, I certainly understand the need and that it would help the resource there. Not sure what my hang up is, but I bet some onf you get it.

Another thing I want to do is get the trail cameras back up. I like to take them down before hunting starts and usually don’t get them in again until April. I do think some deer spook from the cameras. This year, though, I want to get them in early and leave them in through the season. I simply want to see more of the activity that is happening on my hunting land and to get more pictures of our products in use. Hoping to get out there before March this year to hang them. I used my first Solar Spypoint cam last year. I like knowing the batteries never go dead. My other cams get great life, but I have had some issues with the lithium cells. I think they were a bit old and it seemed one cell went bad, taking down the whole cam. It sucks when that happens on a 4 month soak!

I also want to plant some evergreens. My property is very diverse, and there are some big white pines near by. However, there are no good pines for cover. I am going to pick up some white spruce or Norway spruce to put in some of the bedding areas. Deer are not supposed to readily eat them, so I am hoping they will be ok. Hopefully the deer do not rub them and kill them. I think they will also make good cover for the grouse. I haven’t been seeing as many as of late. Having gotten a few bobcats and coyotes on cam, maybe they would benefit from some cover.

With the wet weather of the last two years, plant and tree growth has boomed. I really need to trim out some shooting lanes and walking paths to stands. Right now, I walk down the main deer trail in a loop to my newest stand. I don’t like doing that. I want to cut my own trail where I will not have to touch branches and such on the way to my stand. I asked for and received a nice rechargeable 40V chainsaw for Christmas and I bought two extra batteries. It is a Worx saw. It has good power and battery life so with the three packs, I think I can get a lot of work done on a single trip. It won’t reek of gas and is much quieter that a regular chainsaw. I’ll make a post after using it to let everyone know how it works.

My new stand was very good this year. I took a deer with the crossbow and also had a successful rifle hunt. The only problem I have is that deer did see me. I put in a two person ladder stand (I push 350lbs in full gear) up against a poplar tree and there is no cover. I am up 17 feet, but they still look up at me. I have a blind to put on the stand and may add some additional camouflage to prevent that from continuing to happen. The doe I harvested with the crossbow watched me for a couple minutes, but ultimately made the wrong decision and continued toward me. I shot her at 6 yards while some of our synthetic scents distracted her. I’m not so sure a big buck would have taken the risk, and I did have one that came about 30 yards away with a couple does. One of the does seemed to check me out and then made her way in the opposite direction. Can’t say for certain she made me, but she didn’t seem t want to risk it. The buck followed.

My last plan is to get up there in the very near future and see if I can take out a coyote or two. Now that we just got snow, I can often tell how many dogs are around by the tracks on the frozen creek. If I see more than I like, I may have to try some calling.

I do have another chore I need to get done. I bought a new small water bass boat late last fishing season. It has a fish locator on it, but my old one on the old boat is much better and is full color with down scanning. I bought a trolling motor mount for the transducer (now where did I put that…?) and need to mount it and the main unit at the front of the new boat. I really like that fish finder and want to make sure I have it when I get out on the lake come spring.

I am sure many of you also have off season plans. I hope you find time for them all and get everything done you hope to do. Here’s to all of us having a great 2019 hunting and fishing year!