The doe bleat call (or doe grunt) can be a very effective tool in a hunter’s arsenal. Using a doe call during the pre-rut/ rut period can bring in dominant bucks that may ignore a buck grunt. After all, they are looking for does to breed, the fights are secondary. These types of calls can also be especially effective during the later or repeat rut periods when does who “missed” come back into estrus. Just remember, having a buck hear your bleat is one thing; it is another to successfully get him into range for a bow or crossbow.

Doe vocalizations during hunting should be used sparingly. Perhaps make a few doe bleats/ grunts every 30 minutes. Don’t overdue it. When was the last time you heard does making all kinds of noise in the woods? Too much calling is an unnatural presentation. To perfect your calling, look online for videos of both people demonstrating and of the deer vocalizing themselves. You will be a pro in no time.

Once you have the calling down, are you good to go? Not really because you can do better. Generally speaking, when bucks hear another deer vocalize, they don’t come straight in. Instead they tend to circle down wind and investigate the scene with their noses. That is where a good synthetic scent comes in. If you want that smart old buck to believe the doe is there, let him smell her when he is checking it out. A great scent for this early in the season would be Lucky 7 Nanny Doe, one of our Confidence Scents. Now the buck will not only believe he heard a doe make a bleat or grunt, we will smell an older doe, a breeding age doe. He will relax, believe it is real and hopefully pass right by your stand on his way in. If it is the rut, a scent Like Lucky 7 Synthescent Doe In Heat PLUS can be extremely effective. If the rut is in full swing, one of our doe estrus/ buck scent combinations can really rile those big boys up.

Often time, hunters use decoys while calling. Why not add an enticing sight picture with a doe decoy? If you do, removing the odor from it is important and then you’d want to make it smell right. Lucky 7 Decoy Dope is just the scent to accomplish that. If your decoy smells like “nothing”, bucks get very suspicious. If they see her, they want to smell her.

If you haven’t used doe vocalizations before, perhaps it is time to pick up this terrific tactic. It can be very enjoyable to “talk” to the animals you hunt and adds a satisfying new dimension to deer hunting. Nelson Creek Outdoors also carries a couple effective yet affordable deer calls. It is convenient to pick one up at the same time as you order your scents for the year. One of my fondest memories is using one of our grunt calls to bring in a 170 class 10 point buck and then watch as a larger bodied 8 point charged in and kicked his tail. I didn’t get either deer as it happened fast and just out of bow range, but it is still among my most exciting deer hunt memories. 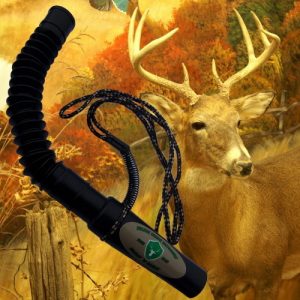