What is a doe cooter juice scent? Why would you want one? Cuz they work! Lucky 7 “The Juice” Dominant Buck Attractant is another great, revolutionary product on the cutting edge of synthetic deer scent technology.

First, a bit of a short background is needed. Nelson Creek Outdoors invented this scent formulation on our own (if you heard anyone claiming to have hired a team of scientists to develop it for them, it is completely untrue. I am the only scientist that formulated it). While we did allow it to launch with another brand label, we did stop that. It was WILDLY successful in that many people harvested large trophy bucks with it. The short run in November and December of 2020, mostly in southern states like Louisiana, flooded Facebook with pictures of the hunters using it and the bucks they harvested. We have brought it back under the Lucky 7 label as “The Juice” and have returned to our original plans of offering it in 2021. The proprietary formula remains a trade secret and no other company will be able to duplicate it cuz the formula is very hard to reverse engineer and we have legal protections.

So, what does this doe cooter juice scent do? It replicates the odors of a doe who is actively breeding. When breeding takes place between a buck and a doe, many changes take place. First, her hormones and pheromones are at a peak. Once bred, the doe’s vagina (which is how this classifies as a cooter scent) undergoes chemical changes, including scent and ph level. Lucky 7 “The Juice” replicates these changes that are detectable by the buck. He believes she is already actively breeding and this makes him frantic. Does generally have 2 or 3 fawns. In many years, these fawns can each have a different father. So the buck knows he has already likely lost a chance to pass on his genes to one of these fawns. If he doesn’t find her quick, he will be unlikely to reproduce with her and father any of her other fawns. He wants to deposit his sperm to fertilize any remaining eggs before the other buck’s sperm accomplish that task. It becomes a race the male does not want to lose.

The best (but not only) way to use this scent is on a drag or wick. Place a generous amount on the drag and let it pull along behind you, depositing a trail of scent on the ground. Dominant bucks cruising by will detect the odor and follow the trail to you. Hang the drag or a wick on a branch nearby and within shooting range. Stay prepared as the action can come fast and at any time! When done, bring that wick out of the woods with you. This helps to ensure a buck will only come by during daylight hours and while you are in your stand.

Nelson Creek Outdoors has truly revolutionized rut scents. This new class of scents has the power to truly excite a dominant rutting buck and pull him in under the illusion he will get to breed, but his timing is critical. It triggers multiple breeding and aggression behaviors that are built into his DNA. If you are looking for scents that can outperform all others, including real urine and glandular secretions, you definitely need to check out the new scents under the Lucky 7 banner. You’ll be glad you did! 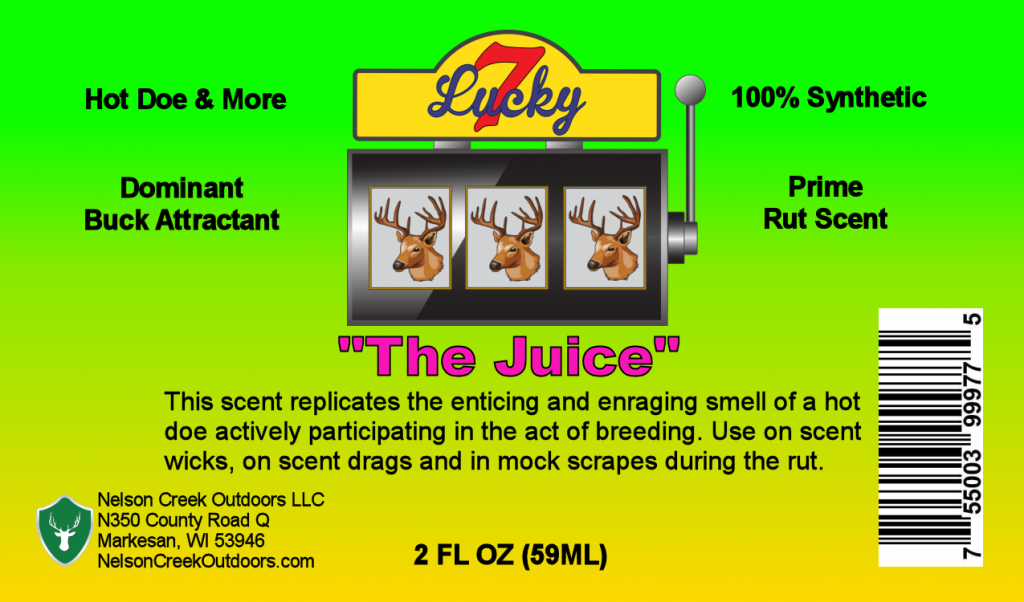 Why Use a Doe Cooter Juice Scent? Cuz It Works! “The Juice”

To be very clear, “The Juice” is a proprietary formula of Nelson Creek Outdoors.