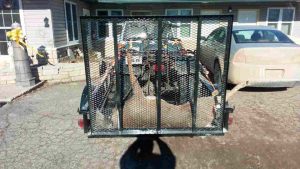 I was out for opening weekend of the 2018 Gun Deer Season. This is how it went.

I had created a mock scrape near my stand using Lucky 7 Synthescents Doe-In-Heat PLUS, Buck-In-Rut MAX and Preorbital Licking Branch GEL. I like to rough up the soil with a hand rake, creating a 3 foot by 3 foot area clear of debris and dug down a 1/4 inch or so. I locate these near traffic corridors and under a nice deer-head-high branch. I apply about 1 oz of the synthetic doe urine and 1 oz of the synthetic buck urine directly to the freshly roughed up soil. On the branch above the scrape, I use the included brush to swab some Preorbital Gel on the most vertical stem I can find. This is about 25 yards in front of my stand. I took a doe from this stand the previous weekend with my crossbow as she headed for the same mock scrape.

I was in my stand right at opener. Not a lot of shooting. We don’t have a lot of pressure in the area. However, it seemed to be enough to keep the deer in hiding. It was almost 11am before I heard a deer headed my way.

He was BIG. 200 plus pounds with a large, wide tall rack. I heard him slinking through the brush and crusty snow about 30 yards to my right. I saw glimpses of his antlers and huge body, but I cannot shoot from the seated position in that direction, nor did I want to try to pound through the heavy brush. He was headed for my scrape, and he was about 15 yards from an opening as he was still moving perpendicular to my stand. I stood up to get a good shot when CLANK, I bounced my belly pack off the shooting rail. It wasn’t very loud, but was loud enough. I saw him turn, tail half up, and slink out the way he had come.

I wish this story had a better ending. The fact is, I never got another chance. I did see him the next morning, but he was even farther in the brush and was not going to come my way. I heard hm breaking fresh ice in the marsh a few times over the next few hours. Then silence.

All was not lost, though. Twenty minutes after seeing the buck the first time, two does came in from behind and crossed right under my stand. Thankfully, our new Whitetail Alchemy – Scent Eradicator (coming soon) kept my scent down and the synthetic doe in heat helped as a cover. As they headed to check out the scrape, I decided to take them both. Venison in the freezer.

Next Saturday should provide another chance at the Big Buck. Stay tuned.